Samsung has launched a special Olympics Edition of the GALAXY S III in Taiwan to celebrate the 2012 Olympics set to take place in London, who is the official sponsor of London 2012 Summer Olympic Games. The package contains three smartphone standards with figurines of Olympic cyclists, weightlifters, and a Tae Kwon Do practitioner. 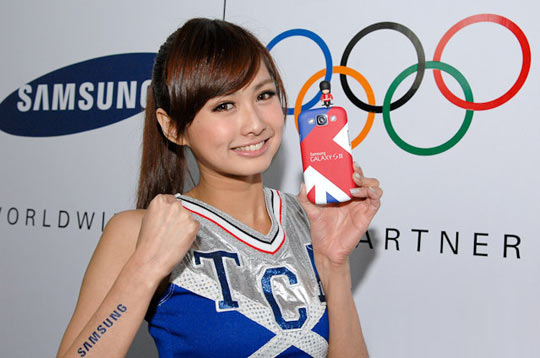 Galaxy S3 is the flagship device of the Samsung, GALAXY S III limited edition features a back plate with a stunning British flag design, and another back plate with a silhouette of a royal British guard. Finally, an accessory for the 3.5mm headset jack features a royal British soldier, though it has no other functionality role more than looking nice.

The Samsung Galaxy S3 special edition will be distributed in a limited edition enabled with Visa’s mobile payment app – Visa payWave, to athletes and selected partners.

There’s also a static wallpaper representing the same faceless British royal guard available for download through Samsung Apps on July 22nd. There is no any price information about GALAXY S III’s premium package, the only pricing detail available is that the back cover costs $299 Taiwan dollars. If you want to see more images of the Samsung Galaxy S3 Olympics Edition browse this link.