Samsung has launched the Galaxy Beam, the ultra slim projector smartphone, in India. Earlier Samsung introduced the Galaxy Beam, successor of their previous Beam at MWC 2012 in February. It was expected to be launch in South West Asia including India in May, but it got delayed. They have started pre-order last month and went on sale last week. 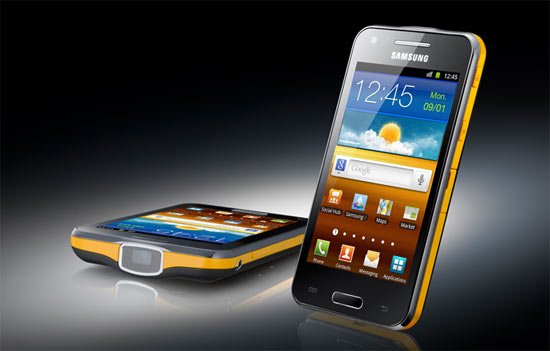 The main features which makes this phone differ from the others is its projector. The phone has a 15 lumens pico projector that can show images up to 50-inches wide, at a distance of 2 meters.

Samsung Galaxy Beam’s built-in projector gives you the freedom to share – to really share – all kinds of contents with your friends virtually anywhere. Stunningly good definition with a gradated throw up to 2 meters away, you can adjust sizing as you wish, up to 50 large – as big as your TVs.

The Samsung Galaxy Beam is available at MRP of Rs. 33,900 but you can get it from Samsung eStore for MOP of Rs. 29,990 with free shipping and cash on delivery service. It is available exclusively at all Samsung Smartphone Cafes.