NASA has announced the launch of Spacecraft 3D Augmented Reality app for iPhone and iPad users that is available on the iTunes App Store for free right now. The app is called Spacecraft 3D and which allows you to learn about and interact with a variety of spacecraft that are used to explore our solar system, study Earth, and observe the universe. The app uses animation to show how spacecraft can maneuver and manipulate their outside components. 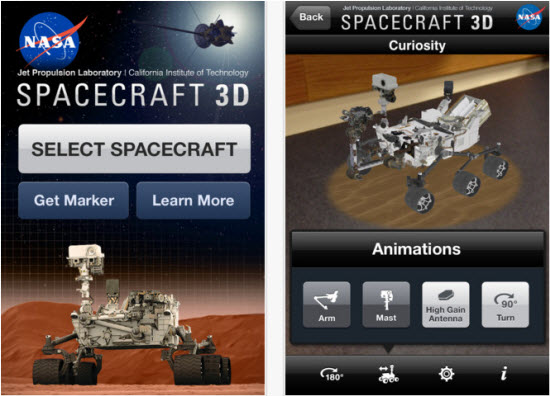 Spacecraft 3D uses the iPhone or iPad camera to overlay information on the device’s main screen. The app instructs users to print an augmented-reality target on a standard sheet of paper. When the device’s camera is pointed at the target, the spacecraft chosen by the user materializes on screen.

Using a printed AR Target and the camera on your mobile device, you can get up close with these robotic explorers, see how they move, and learn about the the engineering feats used to expand our knowledge and understanding of space. Spacecraft 3D will be updated over time to include more of the amazing spacecraft that act as our robotic eyes on the earth, the solar system and beyond!

Download free NASA Spacecraft 3D app for iPhone and iPad from the Apple iTunes Store. According to NASA, the app is only available for Apple devices now, but other formats are coming in the future.