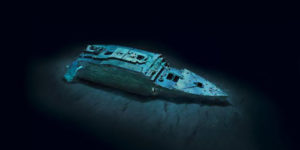 Titanic, the world’s best-known cruise ship was launched in May 1911, the ship sank in April 1912 after colliding with an iceberg en route from Southampton, England to New York City. Titanic was carrying more than 2,200 passengers and more than 1,500 reportedly died. Today, the Titanic rests, disintegrating at the bottom of the Atlantic … Read more